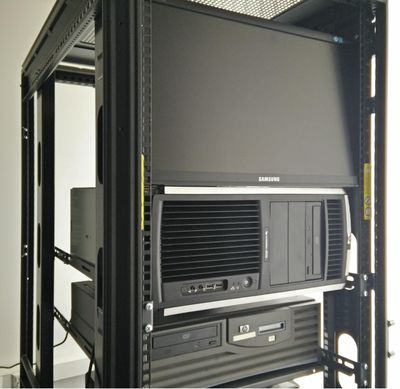 In the middle you see our HP C8000 machine (sibaris) which acts as Debian buildd server and currently builds most of the hppa packages. An overview of all our build servers is at http://unstable.buildd.net/index-hppa.html

Today the recommended installation of a new parisc machine is via the debian-ports unstable respository at http://debian-ports.org as described in the following section. An install image can be downloaded from this list:

If you want to install debian the hard way with many manual steps, you can read the instructions at Debian_Ports_Installation_Manual.

The latest installation medias for Debian unstable is available at either one of the following locations:

In those directories you find (you need to download only one of those):

IMPORTANT NOTE (only for the debian 7.0 installer image)

[edit] How to disable systemd and switch to sysvinit

Debian 8 installs systemd by default. There is no way around it.

So, if you want to switch back to sysvinit, e.g. if you do kernel developement without initrd, then first install Debian as described above. After the first boot follow those steps and finally reboot again.

Futher instructions are on this external website: How to remove systemd from a Debian jessie/sid installation

After installation an old Linux kernel like 4.16 is installed. Newer Linux kernels run much more stable and faster.
To upgrade to the latest kernel, make sure you have this additional entry in /etc/apt/sources.list:

which contains only the minimal set of necessary files for installation.
This is realized by the preseed/url=http://parisc.osuosl.org/debian/preseed.cfg Linux kernel parameter which is hardcoded in the palo bootloader code in those images.
I would prefer to directly install from the official debian unstable repository at http://ftp.debian-ports.org/debian/ but this is not possible, because:
The iso images were created with debian-cd, File:Debian-cd.diff.gz is the diff which was used to build them.
See How to create Debian unstable iso images on how the images were created.