PA-RISC machines need a firmware ("PDC" = Processor Dependend Code). Qemu comes with a precompiled PDC firmware for hppa (pc-bios/hppa-firmware.img), which is based on a fork of SeaBIOS .

The emulated machine is a HP B160L desktop machine, with one or more 32-bit PA7100LC CPUs.

The QEMU emulation is able to run Linux and HP-UX.

QEMU on parisc has been developed by:

While running you can press

[edit] Examples on how to start the emulator

The emulated guest may use specific asssembler statements to control the qemu emulator:

[edit] How to build QEMU from source

Check out the qemu git tree

[edit] How to run QEMU with Debian-10 installer image

according to this document "msus" means "mass storage unit specifier" and "msvs" means "mass storage volume specifier" while the msvs is sometimes called an "msus". I assume HP-UX 9.05 doesn't know how to handle the emulated SCSI PCI card and thus can't access the disc. Remember, a B160L is different to a HP700, and a HP700 had a built-in LASI700 (NCR700) SCSI controller.

Please note that at least NetBSD-8 required. NetBSD-7 doesn't work, since the NetBSD kernel trap handler code complains about the stack pointer in the trap frame. Reported error is:

It boots, but fails during device detection because Qemu currently emulates a B160, while MkLinux expects a HP700. So it fails to see the LASI chip below the GSC bridge. 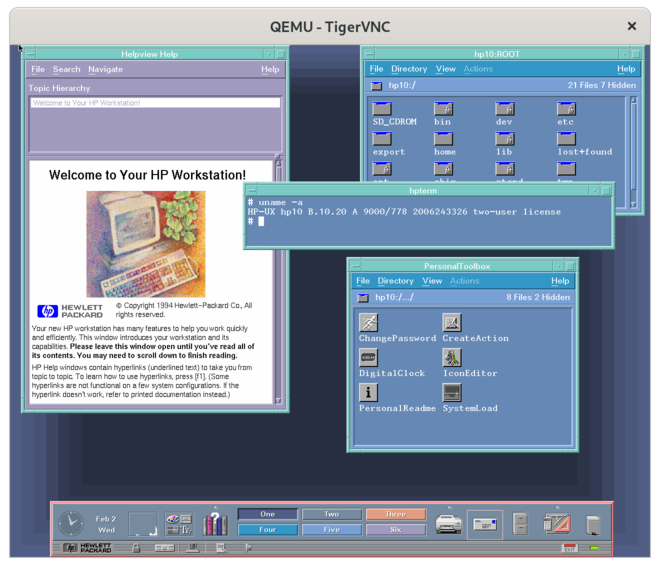